​"So we, being many, are one body in Christ, and every one members one of another."

​The name One Body in Christ in Love, taken out of Romans 12:5, was a revelation given to Apostle Auberry by the Lord around 1998. The Lord told him that it is not just the name of a church but that it is truly a message to the Church (the Body of Christ) that God is coming back for one body that is in Christ that is in love.  After receiving "The Message", the Lord sent Auberry on an assignment to start ministering the gospel at Oak Grove Park in North Miami, Florida. The Lord told him: “I am sending you to the young kings. I want you to begin to disciple My young people.” Though hesitant at first and not sure of what the Lord was doing, he obeyed the Lord, went to the public park and began preaching the gospel. As he obeyed God, more and more young disciples were added to him daily, and services began to be held there.

Within the span of about two years, the Lord had Auberry leave the park and attend another ministry. While he was at that ministry, God imparted many things into him and he began to teach a discipleship class. During the time that he was teaching the discipleship class, God gave him a revelation about relationships. God revealed to him that boyfriend/girlfriend relationships are not of God, yet people have allowed the enemy to bring it into the church as if it were pleasing to God. God also revealed to him how important all relationships are to God. As a result of preaching this revelation on relationships, the ministry where he was teaching at eventually rejected the message and rejected him, and the Lord sent him back to Oak Grove Park.

In 2000, One Body in Christ in Love (OBICIL) became an official ministry. The Lord eventually gave Auberry the inspiration to design the official OBICIL heart logo. The ministry would later publish the logo on t-shirts to be worn as a visual representation to accompany "The Message" that the Lord wanted to relay to His people -- The message that Christ is not coming back for a revival of silver or gold, but for “one body in Christ in love”.

The logo demonstrates a white man, black man, yellow man and red man -- all symbolic of different nations -- facing in opposition against one another while inside of a heart. The issues that cause the opposition is hatred, bitterness, pride, racism, prejudice and sin within the hearts of man. Christ, the anointed one, is the only one who can break down and destroy the yokes within the hearts of man which prevents them from walking together as one body in love. 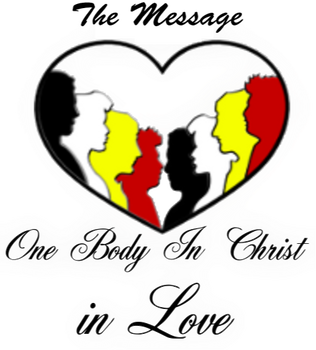